In 1957, a small group of people gathered in an office on Wurtsmith Air Force Base to discuss the possibility of starting a credit union. After extensive discussions with federal regulators and a Michigan Credit Union League consultant, it was decided a credit union would be of great benefit to U.S. Air Force personnel, their families, and government employees working on Wurtsmith AFB. With great expectations, each person present offered a contribution of $5.00 and with less than $100.00 total, Wurtsmith Federal Credit Union was born.

On October 23, 1957, the doors opened to a total of 48 members. From that day forward Wurtsmith encountered many changes. By 1964, the credit union reached the million-dollar asset plateau, and because of its continuously growing membership, the credit union moved off the Air Force base in 1969. In 1977, after merging with Oscoda Sacred Heart CU and Tawas Community CU, our charter changed and Wurtsmith Federal became Wurtsmith Community Federal Credit Union.

After the closing of Wurtsmith Air Force Base, it was decided that we needed a new name which would more accurately describe the total membership. On October 1991, our name was changed to Northland Area Federal Credit Union.

Since 1957, it's been our privilege to serve the people of Northeastern Michigan. For 65 years our guide has been a simple one - Not for profit, not for charity, but for service. The same credit union motto that has embraced a shared philosophy of values for over 100 years. With this single principle at our helm, we have grown. We are honored to be a 100% member-owned credit union - now 50,000 members strong. 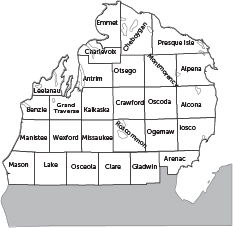 People who live, work, worship, or attend school in and businesses and other legal entities located in Alcona, Alpena, Antrim, Arenac, Benzie, Charlevoix, Cheboygan, Clare, Crawford, Emmet, Gladwin, Grand Traverse, Iosco, Kalkaska, Lake, Leelanau, Manistee, Mason, Missaukee, Montmorency, Ogemaw, Osceola, Oscoda, Otsego, Presque Isle, Roscommon, and Wexford counties in Michigan; and also included are spouses of persons who died while within the field of membership of this credit union, employees of this credit union, members of their immediate family or household, and organizations of such persons.